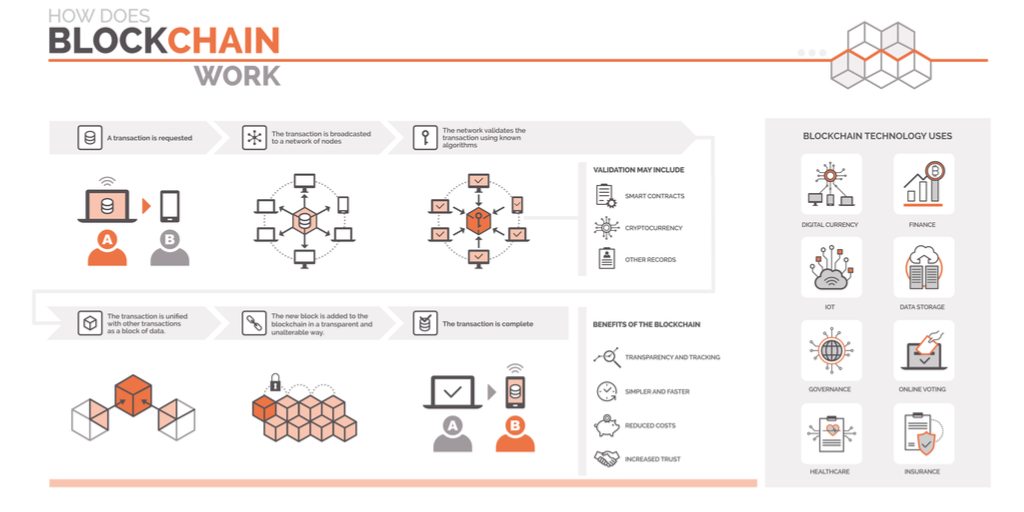 When it comes to their functions, most cryptocurrencies are variations on Bitcoin, the first widely used cryptocurrency. Like with traditional currencies, cryptocurrencies express its value in units. For example, you can say “I have 2.5 Bitcoin,” in the same way that you would say, “I have $2.50.”

The blockchain of a cryptocurrency is the master ledger that records and stores all the prior activity and transactions. It validates ownership of all units of the currency at any given time. As the record of a cryptocurrency’s entire transaction history to date, a block chain’s length is finite. This means that it contains a limited number of transactions that increase over time.

There are identical copies of the block chain which are stored in every node of the software network of the cryptocurrency. It is a network of decentralized server farms that are run by computer-savvy individuals or groups of individuals called miners. These miners record and authenticate cryptocurrency transactions continually.

During the lag time between the initiation and finalization of the transaction, the units aren’t available for use by either party. Thus, the blockchain prevents any double-spending, or the manipulation of cryptocurrency code to let the same currency units to get duplicated and sent to various recipients.

Every holder of cryptocurrency has a private key. This key authenticates their identity, and it allows them to exchange units. Cryptocurrency users can make up their own private keys, which are then formatted as whole numbers ranging between 1 and 78 digits long, or they can use a random number generator to create a private key. When they have a key, they can obtain and spend cryptocurrency. Without this private key, the holder cannot spend or convert their cryptocurrency, which would render their holdings worthless unless and until they recover the key.

While this private key is a critical security feature which helps to reduce theft and unauthorized use, it is also draconian. If you happen to lose your private key, it is the digital equivalent of throwing money into a shredder. While you can create a new private key and start to accumulate cryptocurrency again, you cannot recover the holdings that are protected by your old, lost key.

Cryptocurrency users have “wallets”. These wallets have unique information confirming them as the temporary owners of their units. Whereas private keys verify the authenticity of a cryptocurrency transaction, the wallets can lessen the risk of theft for units that are not being used. The wallets used by cryptocurrency exchanges are slightly vulnerable to hacking. For example, Japan-based Bitcoin exchange Mt. Gox closed down and declared bankruptcy after hackers systematically relieved it of over $450 million in Bitcoin exchanged over its servers.

When it comes to storage, wallets can be stored on the cloud, an external storage device, or an internal hard drive. Regardless of how a wallet is stored, it is strongly recommended to have at least one backup. Take note that when you back up a wallet, it does not duplicate the actual cryptocurrency units. It just requires the record of their existence and current ownership.

Cryptocurrency miners serve as record-keepers for cryptocurrency communities, as well as indirect arbiters of the value of the currencies. With the use of vast amounts of computing power, often that are manifested in server farms that are privately owned by mining collectives comprised of dozens of individuals, the miners use methods that are highly technical to verify the completeness, accuracy, and security of currencies’ block chains. The scope of the operation isn’t much different to the search for new prime numbers, which also requires massive amounts of computing power.

The term “miners” relates to the fact that miners’ work creates wealth in the form of brand-new cryptocurrency units. What’s more, every one of the newly-created block chain copies comes with a two-part monetary reward. It comes with a fixed number of newly minted (“mined”) cryptocurrency units, as well as a variable number of existing units that are collected from the optional transaction fees (typically less than 1% of the transaction value) that’s paid by the buyers. Therefore, cryptocurrency mining is a potentially lucrative side business for those who have the resources for investing in power- and hardware-intensive mining operations.

Although mining periodically produces new units of cryptocurrency, most of the cryptocurrencies are designed to have a limited supply. This means that as time goes on, those miners receive less new units per new blockchain. Eventually, miners just receive transaction fees for their work.

This has not yet happened with any extant cryptocurrency; however, observers predict, if the current trends continue, that the last unit of Bitcoin will be mined sometime in the mid-22nd century. Therefore, the finite-supply cryptocurrencies are more similar to precious metals, like gold, than to fiat currencies, which, theoretically, have unlimited supplies.

Some of the many lesser-used cryptocurrencies can only be exchanged through private, peer-to-peer transfers. This means that they are not very liquid and are hard to value relative to other currencies, both cryptocurrencies and fiat currencies.

Cryptocurrency exchanges have a valuable role in creating liquid markets for popular cryptocurrencies. They set their value relative to traditional currencies. However, the exchange pricing can still be extremely volatile. For example, Bitcoin’s U.S. dollar exchange rate fell by over 50% in the wake of Mt. Gox’s collapse.